Picture this, you’ve just moved to a new town and your coworker invited you to a social gathering. You are super pumped to go because you realize this could be a major opportunity to meet and engage with new people. It can be hard to make new friends in new environments, so you humbly accept the invite.

As you’re heading to the gathering, you give yourself one of those embarrassing pep talks, telling yourself to relax and to not be so nervous. You’re not normally timid, so this should be a breeze, or so you think. You arrive at the venue and you walk in with your chin up, shoulders back, and head held high. Once you walk in, you let the door close behind you and all of a sudden, everyone stops and stares at you. You’re left standing there like a deer caught in headlights.  Everyone notices that they don’t know you, and so they all resume back to their conversations. All that confidence you went straight out of the window. 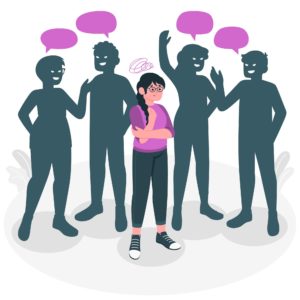 I  guess you assumed that everyone would welcome the newbie of the town with open arms, but that was not the case. You frantically search for your coworker because they’re the only one that can relieve you of this minor case of social anxiety. Sadly, you can’t find your coworker anywhere. And you’re just hoping that by chance, someone will walk up to you and strike up a conversation. You feel left out, you are yearning for a sense of belonging and acceptance that is being ignored so to speak, and we can all attest to that being such a horrible feeling.

This idea of feeling excluded has been felt historically by a number of social groups. For example, let’s focus on those who live with disabilities. For centuries prior, people with disabilities— whether it was physical or cognitive, were viewed as restricted, deprived individuals that were unable to make contributions to society. It’s sad to think that this group of people were viewed as abnormal or having less than average intelligence. 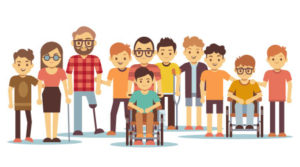 Instead of taking time out to understand a person’s life and experiences, society became fixated on assuming what they thought they knew, which does not promote positive and effective change. This effective change came not too long ago in the U.S. for those that live with disabilities. It was 30 years ago in July of 1990 that the Americans with Disabilities Act was passed by our government. Gone were the days of discrimination against those with disabilities in public and private arenas, workplaces, schools, and transportation. You would think that inclusivity for all would be something that we should naturally want to attain, instead of having a law that demands that we do so is absurd, but I digress.

The disadvantages of exclusivity are often based on gender, age, occupation, race, ethnicity, religion, gender identity, and unfortunately, the list goes on. As members in society, we too can promote inclusivity by recognizing your own bias. We all have norms that are, well, normal to us individually. But sometimes we have to take a step back from what we feel and try to be as objective as possible. We should also make a conscious effort to provide an open means of communication and allow others to express their opinions without fear or retribution. And lastly, whenever you see exclusivity taking place, you should be ready to speak up about the acts of discrimination. Because this could be a learning opportunity for those who may be unaware, but also be the catalyst to necessary changes that will promote inclusivity for all.

In honor of Disability Pride Month, here are some books that discuss disabilities. You can find them at your local Augusta-Richmond County Public Library. Are You Chasing the Elusive Butterfly of Happiness?