The Malice of Fortune by Michael Ennis is an example of the best of historical fiction. In this novel, the reader is in contact with some of history’s great actors. As Ennis says through Machiavelli’s lips, he enters into the minds of historical figures. 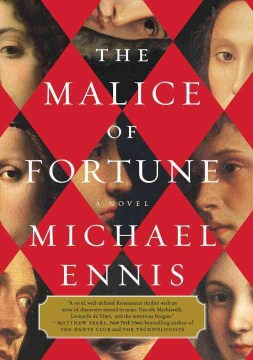 At the opening of the novel, we meet Damiata, a former courtesan who from the height of her profession has plummeted to a life in the Trastevere where she lives in two rooms with her little son and a faithful maid.  But the boy is the outside grandson of the venal, duplicitous, Borgia pope who has no qualms in using his grandson as a hostage to compel his mother to investigate the murder of his favorite son, Juan. Damiata has only one clue to follow, a charm found on the body of a murdered, decapitated woman

Usher onto the stage, Niccolo Machiavelli, soon to be the author of The Prince, but at present a diplomatic clerk for the city of Florence. He follows the court of Cesare Borgia, gathering information and intelligence for his republic. Drawn in by Damiata, their investigation reveals multiple corpses giving evidence of a serial murderer who draws pleasure from decapitating and dismembering his nameless, faceless victims.

As Machiavelli and Damiata search for clues to the murderer of Juan and the identity of the evil butcher, they are drawn into the orbit of Leonardo di Vinci as well as the most famous and vicious of the condottieri responsible for the chaos and destruction in all of Italy.

Can Machiavelli and Damiata unmask a killer and a butcher that they have come to believe are one and the same man while avoiding being snared in the nets of international politics or condemned to sure death? Come join them in 1502, in a tale of suspense that is sure to leave you surprised to the very end.

You can borrow this e-book through the LIBBY app. Contact your local branch library for more information.

We Must Be Brave

My Not So Perfect Life by Sophie Kinsella